Would you like to set your location to Columbus?

Step into another world as you challenge your friends in a laser tag mission at Scene75 Columbus! In our expertly themed arena you will get to show off your laser battle skills! 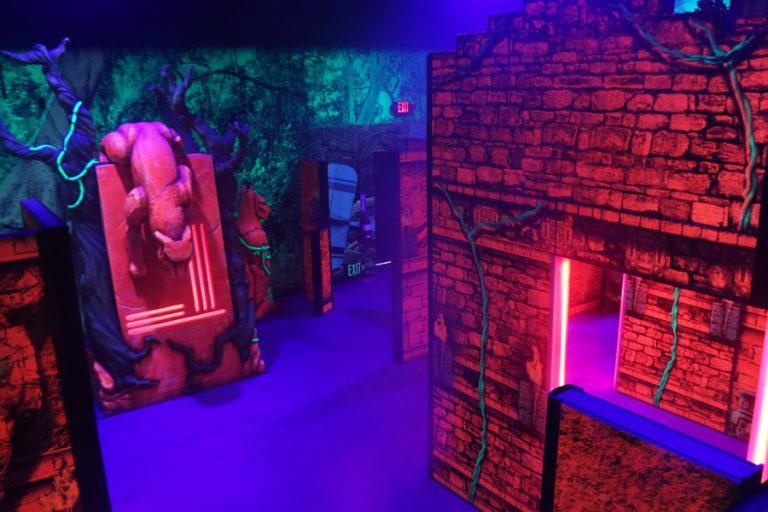 The Best Laser Tag in Columubs!

Enter Scene75 Columbus’s laser tag arena you will be amazed. Blacklights glowing, a mist of fog hovering in the air, and music pumping throughout the tactically designed maze of walls. Equipped with your high-tech laser tag battle suit you aim your phaser, waiting for the mission to start. Your vest begins to glow bright as it activates and the speakers on your vest tell you to GO! GO! GO! The mission has started! It is now up to you & your team to tag the opposing team and zap their base to earn as many points as you can.

At Scene75 each arena is custom designed and painted by an industry leading laser tag arena design firm. Scene75 Columbus is the next chapter in a series of exciting and detailed arenas.

In addition to the expertly themed arena, Scene75 Columbus features the most advanced laser tag equipment on the market. We added interactive features throughout the arena to provide power-ups and bonus points, making the game play even more engaging! There are three power-up beacons each giving out a unique special ability: invulnerability, double points, or “meltdown mode”. The “meltdown mode” is a new special feature that causes sensors on one of the arena buildings (located in the middle of the arena) to light up rainbow. Players that are standing to close to the skyscraper will start to lose points until they get away.

Simply stated, Scene75 Columbus takes the best elements of laser tag from across the world and combines them into one arena! There is no other experience like it!

What you don’t know, we will teach you! Before every game the Scene75 laser tag captain will do a quick briefing and teach you how to play. After going over the instructions & rules the players will be split into teams. Each team will then head into the vesting room to put on their battle suit. Once everyone is ready it is time to step into the laser tag arena and let the game begin!

Featuring over 200 of the hottest video and redemption games in our awesome arcade!

Line up your putt carefully as you play in our two unique Blacklight Mini-Golf courses.

The most realistic baseball gameplay you can experience in a batting cage!

Race around the indoor go-kart track at Scene75 to get the fastest time!

Bounce into fun with inflatable slides, obstacle courses, and more!

Sing your heart out in your own private karaoke booth!

A family fun spinning coaster that everyone is sure to enjoy!

Can you break into the “Vault” with out breaking the laser sensors? Get in and out as quick as you can for a higher score!

Time Freak is an exciting attraction that challenges players to frantically race against the clock to push buttons as they light up!

Inflatables meet ninja warriors, can you stay standing after a minute twenty?

Take a ride in our 7D theater and be transported into a variety of immersive and interactive worlds.